What’s Vastu Shastra and why they call it: “the yoga of architecture” 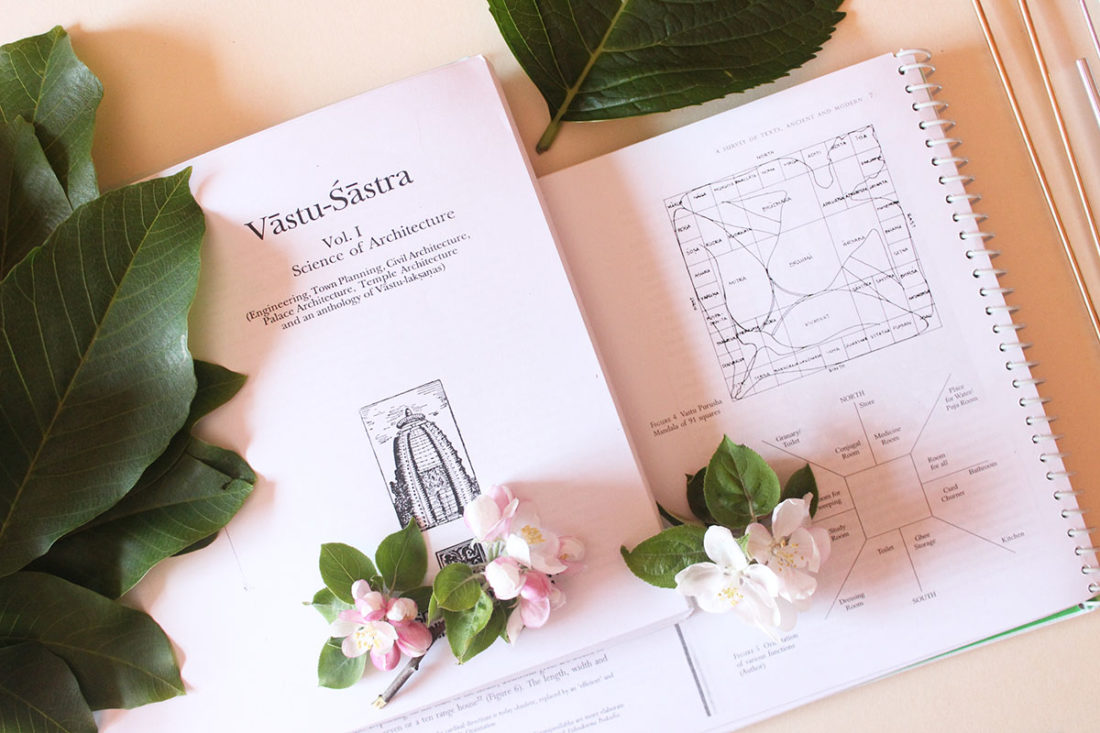 What’s Vastu Shastra and why they call it: “the yoga of architecture”

Every time people ask me what my job is and I mention the word “Vastu Shastra”, I notice that almost no one has heard of it. In Europe people know about yoga, have heard of ayurveda, astrology…but Vaastu? Nope!

(This is when they ask me if it’s like Feng Shui, but this is a question that I will better answer in another post…)

A few years ago, a friend of mine told me that she had found a book about Vastu Shastra in Spanish with the subtitle of “the yoga of architecture”. It made me laugh…but it’s actually a very nice way to define it in just one sentence!

Vastu is actually very related to yoga. And when I say yoga, I mean… REAL Yoga! A spiritual path to achieve union with your Self and not just the physical part that everybody knows, related to body asanas.

So, in this post, I’m going to explain to you the connection between Vastu and Yoga but, first of all…what exactly is Vastu Shastra? 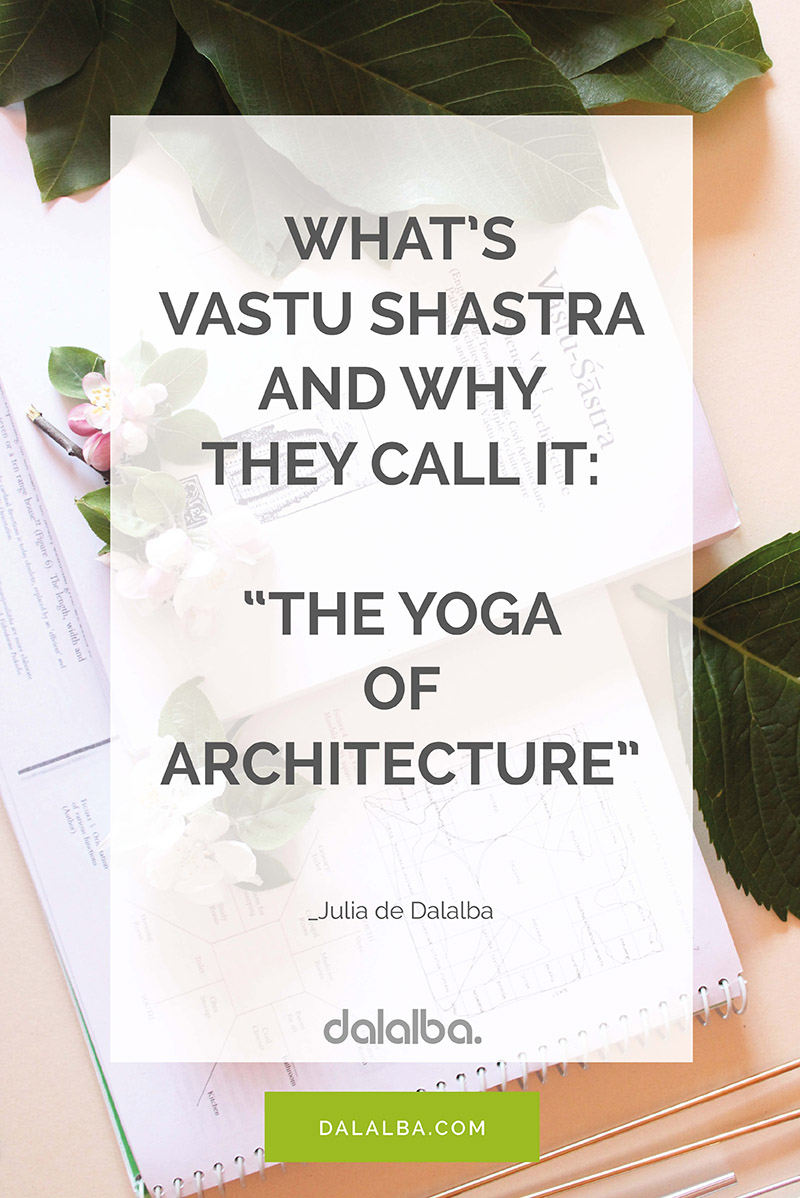 Coming from Sanskrit, vāstu (place, building) and śāstra (science, teaching) is the traditional architectural system of India. It aims to design and build in harmony with the natural forces of Creation, where the energy (prāṇa) plays an essential role to ensure the well-being of its inhabitants.  It covers all aspects of house, temple design and construction. It’s a holistic discipline of architecture that follows specific parameters such as: geobiology, orientation of the building, geometry, proportions, distribution of the rooms, circulations, construction, selection of natural materials, furniture lay out, ornamentation, etc in relation to the cosmic and natural forces. The orientation of the building respect to the cardinal directions and the balance of the main elements within: water, fire, earth, air and ether are also of vital importance.

It’s goal is to create healthy and harmonious places with good vibrations. What makes it different from other ways of building is that Vastu is considered a sacred subject. It’s an art in its highest sense and a philosophy of manifestation that combines science with spirituality. It goes beyond what is defined nowadays as “green architecture” because it deals with the transcendent. In other words, the highest goal of Vastu is to create buildings as nexus between heaven and earth, like a temple.

It was originated in India thousands of years ago by the Rishis (sages with Divine knowledge) to build temples and palaces. It’s considered as one of the four main Vedic sciences along with yoga, ayurveda and astrology. The four of them are interconnected to support the health, well-being and spiritual development of mankind. I actually learnt many things about Yoga through Vastu and vice versa, I’ve found them to complement each other!

It happens the same with astrology. When I do the Vastu corrections of a property, I collaborate many times with a Vedic astrologer and it’s fascinating for me to see how both disciplines match.

Many people think that Vastu leads with superstition and believe me, I would certainly think the same thing if I’ve read all the nonsense information that circulates around the internet! Unfortunately, I have to say that many aspects of Vastu have been distorted and misunderstood (as it happens with Yoga and Feng Shui, for example) and there is also a lot of confusion regarding certain aspects.

Every time I go to India, many people tell me there are many Vastu consultants that don’t really know what they’re doing. They just want to make money with it! My heart hurts every time I heard that… but, it’s a reality! I think Swami Kriyananda would say: “they’re doing the best they can for their level of evolution”.

Every body knows how good is the practice of Yoga for health and well-being and it has been scientifically proved. There is an increasing interest in researching the benefits of yoga in renown universities around the world but…what about Vastu?

There are many studies talking about the impact on health and wellbeing from a neuroscientific point of view but I’ve found those to be limited because they don’t considered the human body holistically. To be honest with you, I haven’t came across any scientific research that proves the benefits of Vastu yet.

At the same time, I think that would be difficult to prove because every single space and building are unique and, as far as I know, it doesn’t exist any machinery that can measure the transcendent side of space yet… even though a big part of Vastu is related to quantum physics. From my own perspective, Vastu can only be fully measured by the advanced yogi that has gone beyond the physical senses and has awakened within what in Christianity is called “the beatific vision” (basically, a saintliness condition!). Certain subtle energy fields can only be perceived through the heart and the spiritual senses and would be difficult to explain them because they go beyond the comprehension of the logical mind.

Why do people call it “the yoga of architecture”?

Well, after giving such a long explanation for what’s Vastu Shastra, to say that’s “the yoga of architecture” is a nice way to simplify it, considering its direct link with yoga. But there’s more than that. I think they call it that way for 2 main reasons:

Paramhansa Yogananda used to say that the environment is stronger than will power and, I would say that the role of Vastu is to take care of its architectural side. The space where you live is a reflection of yourself and it has a direct impact in your life. And this impact that am talking about, goes beyond the practical use of the space in your daily life. It isn’t something tangible to the physical senses but… you feel it!

Vastu promotes spaces that make you feel good and its often a sensation that is difficult to express with words, like a sacred space. It helps you to be more centred within, its fantastic to support energetically all spiritual seekers in their personal development, uplift your consciousness, make you feel more inspired, healthier and happy by aligning you with your soul purpose.

In my experience I’ve seen that it works for everyone, independently of your religion or belief system. However, highly sensitive persons are more receptive to Vastu because they can immediately feel its energy and benefits.

So, after exploring all this…let’s now make a summary of its main benefits:

1. Personal and spiritual development: It helps you to be more centered, inspired and fulfilled by aligning you with your soul purpose through the space in which you live or work. It supports your development bringing more clarity to what you’re supposed to do in your life.

2. Health and well-being: Improves your quality of life creating healthier spaces in harmony with the natural laws. Live in a space with good vibes that recharges your energy, helps you to rest and sleep better, have more peace of mind, be more productive, enjoy your personal relationships, etc

3. Abundance and prosperity: Believe it or not, it also helps with your finances! If the house is rightly aligned and follows certain Vastu guidelines, it helps with the correct energy flow of money coming into your life. For example, I’ve seen people experiencing money issues after moving to a different house because the new space was blocking or drawing out the energy flow related to money. (You can discover how is the energy flow of money in your house downloading my free guide “Discover how affects your home’s lay out to your money“)

Many of the challenges you’re going through in your life could be affected by your house!!! It’s a pity that most people are not conscious of how much the space where they live is affecting their life. I’ve noticed that many are not aware of this.

I was one of them!  and I moved out of an apartment when I realized through a friend that was making me feel sick. Still, my mind could’t believe how that beautiful apartment located in one of the best places of Madrid could be the reason of my suffering. It had no logic at all because apparently, everything was fine with it! But all my sorrows disappeared as soon as left it! I only understood what could had happened to it years later when I discovered Vastu.

So, can a house be adapted to Vastu?

Oh, yes! There are remedies without demolitions that can be done.

When people realize there’s something wrong with their house and is affecting them negatively (health problems, financial issues, disharmony, etc) through Vastu, they have the tendency to move out or think that they have to do building works…

But, it’s not necessary!! It would be the ideal thing to do in some extreme cases but, it doesn’t have to be that way. For example, I do Vastu remedies without demolitions, I work only energetically and it gives very good results.

After reading aaall this, you might be wondering if your house or business could be affecting certain problems you’re going through. I would certainly have a lot of curiosity! And it’s posible to know in which ares of your life your house is affecting you just analyzing the plans with the North indicated. If you have that, you can always book a Vastu consultation with me, no matter in which part of the world your home is located.

Sending you lots of love & light!