3 reasons why Vastu is not Hindu 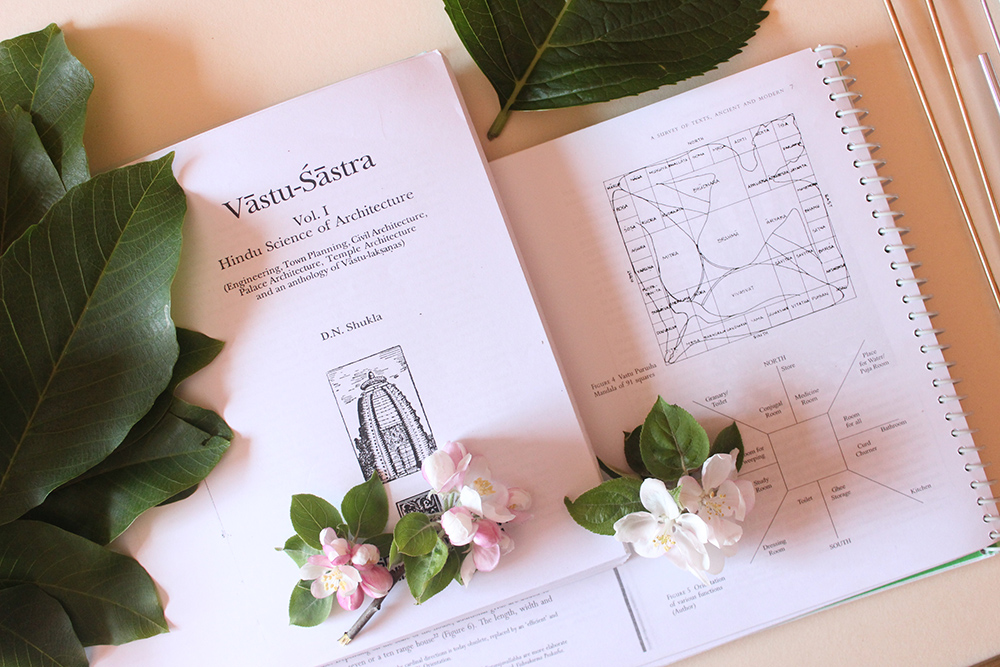 3 reasons why Vastu is not Hindu

Hi dear! Here I am, ready to share with you 3 reasons why Vastu is not Hindu!

Since I started to study and practice Vastu Shastra, I noticed there’re all sort of myths, misunderstandings and superficial judgements about it. And, every time I share that I’m doing a doctoral thesis on Vastu Shastra for Christian Spiritual Well-being… I often hear a…”But, Vastu is Hindu!”. (And, my face is like…LOL)

Vastu is not a well-known subject in the West and, what is practiced in India, is very often a distorted version that differs very much from the original knowledge. I understand there are many popular misconceptions about it and today I’m going to clarify one of them.

Ready? Here we go with the 3 main reasons why Vastu is not Hindu:

1.Not everything that comes from India is Hindu

Many people confused ‘Hindu’, ‘Hindi’ and ‘Indian’ while they are very different things. It was certainly confusing for me when I went to India for the first time in 2013…until I learnt from my mistakes.

This is very basic but, as many people still get confused with it, let me explain you the differences:

-Hindu is the person who practices the religion of Hinduism but there’re many other religions in India such as Buddhism, Jainism, Sikhism, Christianity and Islam.

-Hindi is the official language of India, but there are many other languages such as Marathi, Tamil, Malayalam, English…etc. And, not all Indians speak Hindi!

Now, I must admit the term “Hindu” has become very broad and difficult to define. It is now often used as a form of cultural identity, having little to do with religion. This is something more related to politics, striving to pursue a form of national pride where everything is placed under the umbrella of “Hindu”. However, this leads to many misunderstandings and misinterpretations, specially for the ones that have nothing to do with Hindu religion.

India is a plural country with an immense cultural and spiritual richness but not everything that comes from it makes it automatically ‘Hindu’. 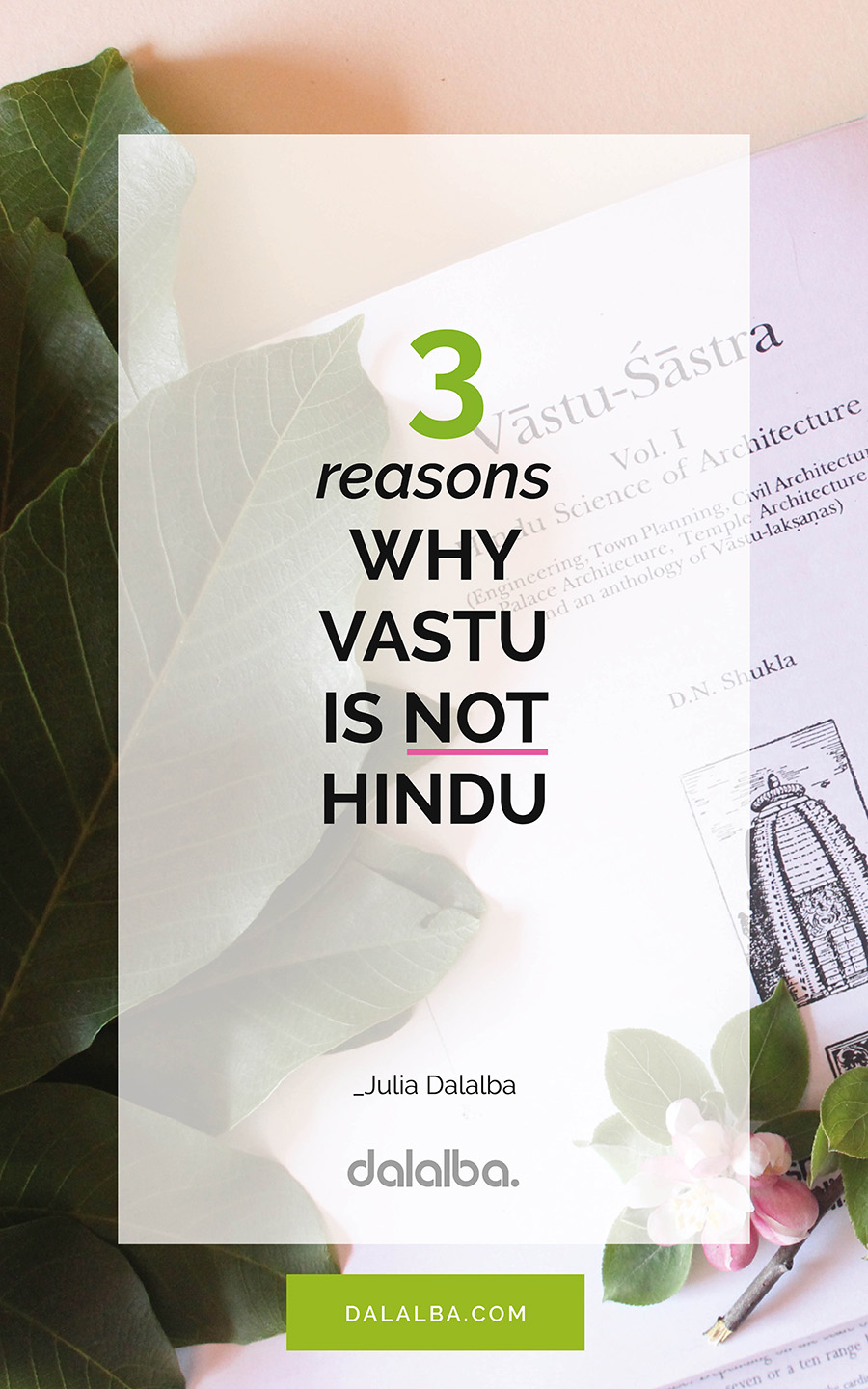 2.Vastu Shastra is a sacred science, not a religion

Vastu Shastra represents an intuitive and embodied approach to architecture coming from the Vedas that combines art and science with spirituality. Its highest purpose is to serve the Divine consciousness, designing and constructing spaces in harmony the environment as a metaphysical rite, searching for well-being on a mental, emotional, physical and spiritual level.

Its methodology corresponds to a sacred science that follows the law of dharma. It’s often confused with Hinduism because its spiritual side has been often mixed up with Hindu religious practices, explained through Hindu lenses or mixed up with superstitious beliefs. Another reasons lies in unawareness in the subject and bad practices in its contemporary divulgation & application.

The Vedic knowledge is universal; spirituality is also universal. If Vastu is often defined as ‘Hindu’ is because is normally handled by Hindus, mixing it more with Hindu religious rituals than applying its architectural science.

In addition to this, I must say that almost all religions present in India have used Vastu Shastra for the design and construction of their temples in ancient times. So, Vastu hasn’t been exclusively used for Hindu temples, specially because Hindu religion came much later. I explain you that in the next point.

3.Vastu is Vedic, not Hindu

As I said before, Vastu Shastra is not Hindu, it’s a Vedic knowledge. The Vedas came thousands of years earlier than Hinduism. The term ‘Hindu’ was used towards the 18th Century by the British to call the people of ‘Hindustan’. The suffix ‘-ism’ was added later on to denote the culture and practices of the Brahmans so they could distinguish them from other religions already present in India.

The first textual evidence of Vāstu was found in the Rig Veda but its origin is estimated in the 15th-10th Century Before Christ while, according to professor Gavin Flood, the formation of Hinduism as religion how we know it today emerged in 19th Century of our era. That means, there is more than 3.000 years of difference between the origin of Vāstu and Hinduism! So, how could Vastu be Hindu?

However, I’m aware that some scholars claim that Hinduism started with the Vedas. Here, I need to mention again the problematic definition of Hinduism along with its long history, origins, diversity and delineation. And, wether you refer to Hindu as religion, culture or country identity.

The term ‘Hinduism’ was soon appropriated by the Indians during the British empire willing to establish a national identity opposed to colonialism; I think this could be main reason why some scholars have treated Vastu Shastra texts as Hindu religious scriptures. And, if the spiritual aspect of Vastu is performed, understood or explained through Hindu lenses, that doesn’t make the entire discipline as Hindu.

During my fieldwork research in India, I had the opportunity to meet the first scholar in India that made a Ph.D. in Vastu, professor Ourseph, and, he is Christian! When I raised this issue to him, he said:

“Vāstu is not a Hindu system of architecture, it is a philosophy of manifestation!”

He also explained that Vāstu-śāstra is a God given science, it holds universal principles that are present in the ancient architectural systems of all cultures. And, in India, the influence of Buddhism, Jainism and Islam also made important contributions to the development of architecture.

I hope that these three reasons why Vastu is not Hindu have made you get closer to the fascinating subject of Vastu! It is my hope to bring some rigor and make it approachable to all those who are interested in having a more harmonious home, regardless of their religion beliefs or cultural background.

Vastu is a universal knowledge for all and, for you too!