Discover the meaning of your Christmas decor with Vastu

Discover the meaning of your Christmas decor with Vastu

Today I am going to reveal you the meaning of Christmas decoration with Vastu. Yes, it may be a bit unusual to associate Christmas with Vastu but… have you ever thought about its spiritual meaning or the energetic impact it has on your home?

I have to say that very few people would associate Vastu Shastra with Christmas decor because it’s often cataloged as a Hindu discipline (it’s actually Vedic, not Hindu, but let’s address this question another time 🙂

What I’m going to share with you here is the meaning of the most typical decoration: the Christmas tree, the Advent crown, the lights … and then give you my global vision through Vastu. I approach it from a yogic perspective, according to the Christian tradition and the teachings of Paramhansa Yogananda.

And, when you think about Christmas, what’s the first thing that comes to your mind? Surely it’s something like holidays, children, gifts, shopping, family, Santa Claus… but his great spiritual background has been lost and that’s what I will try to reveal here, through its Christmas decor with Vastu. 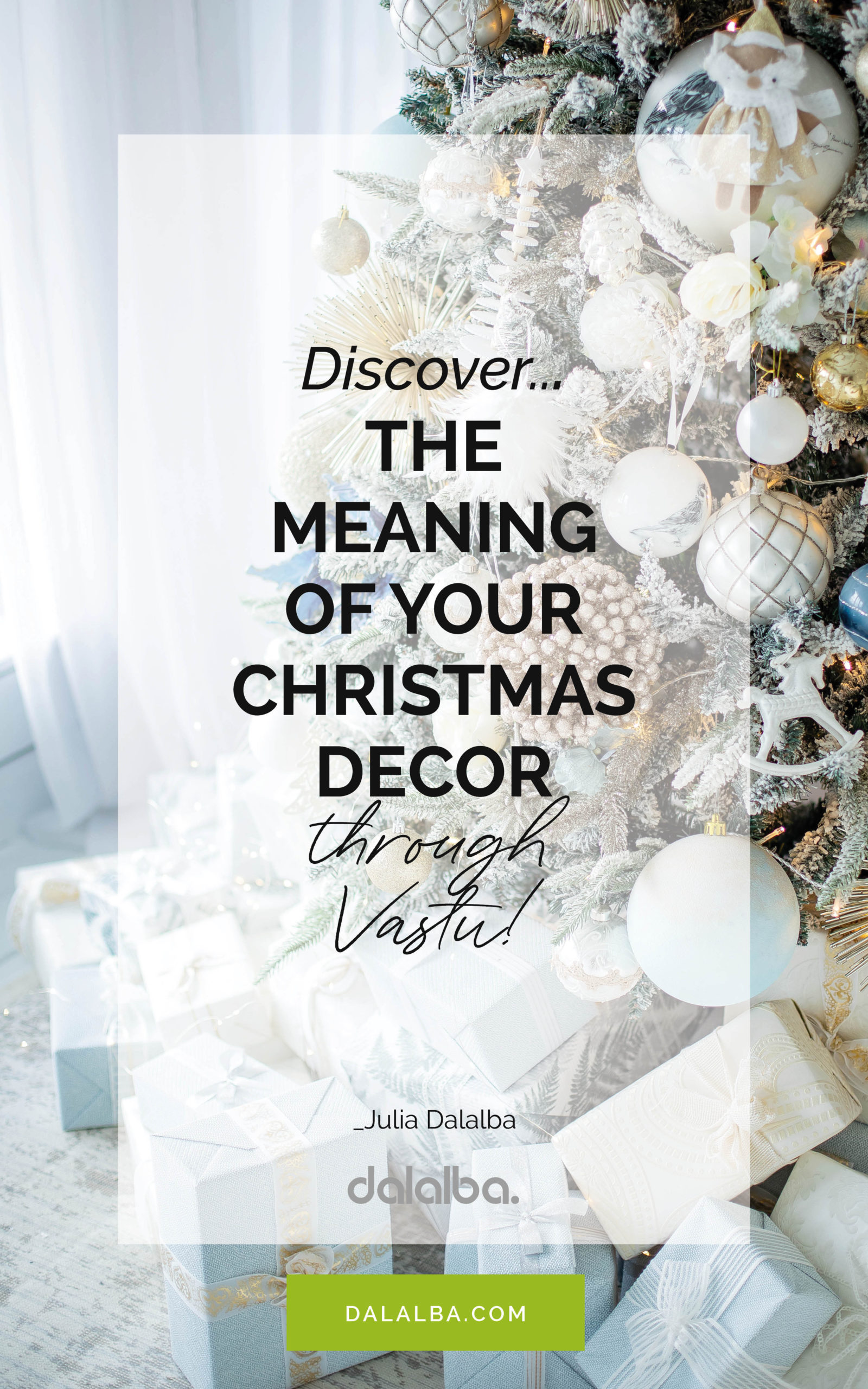 I will briefly tell its history, symbolism and then, I will share its meaning from the point of view of Vastu.

When the first Christians arrived in Northern Europe, they discovered that the birth of Frey, god of the Sun and fertility, was celebrated there adorning an evergreen tree that symbolized the tree of the Universe. So, they took this idea to celebrate the birth of Christ.

It seems that this tradition of the Christmas tree came up in Germany when Saint Boniface, an 8th century German evangelizer, cut down a conifer (which, being an evergreen tree, symbolized the love of God) and adorned it with red apples (symbolizing the original sin) and candles (representing the light of Christ).

Over time, apples and candles became balls, lights, and other decorations. Later on, it was added the tradition of placing gifts for children under the tree, celebrating the memory of Saint Nicholas on December 6 or the Three Kings of the East on January 6, depending on the culture of each area.

As a curiosity, Saint Nicholas was a Saint who helped children a lot, giving them gifts. He became very popular in Germany and was depicted in a red suit and white beard, handing out toys to children from house to house. His name “Saint Nikolaus” ended up being called “Santa Claus” and his arrival began to be celebrated on December 25 in many countries to honor the birth of the baby Jesus. Hence, much of the Christmas decoration moves around his figure.

But let’s return now to the symbolism of the Christmas tree, what does each of its elements really mean?

THE SYMBOLOGY OF THE CHRISTMAS TREE:

In Vastu, there are many sacred objects charged with very powerful energy, capable of raising the vibration of an entire room. As for the Christmas tree, I want to share its symbolism here, so that you become aware of what its decoration means in your home:

THE MEANING OF THE CHRISTMAS TREE THROUGH THE VASTU:

I perceive it as a decorative element full of symbolism that stimulates the senses towards an ideal of beauty and Divine aspiration.

From the point of view of Vastu, it’s an element that gives off a lot of positive energy to the space in which its placed, especially if you add figures of angels and / or archangels as decorative elements. If the tree is natural, it will provide oxygen since its carbon dioxide emissions are very low. On the other hand, the presence of a Christmas tree at home inspires you to adopt an attitude of gratitude.

And what is the most conducive place to place the Christmas tree according to Vastu?

The ideal orientation would be in the North, East or Southeast part of the house. In the house Brahmasthan also seems a good location if the conditions of your house or apartment allow it.

Discover the meaning of the Christmas crown:

The Christmas wreaths represent one of the most characteristic symbols of the Christmas season and are usually placed at the main door entrance of a house or as a centerpiece.

From the point of view of sacred geometry, the circle represents the cosmos and the eternal cycle of life. From the Christian point of view, it represents eternal love. I have seen wreaths with beautiful flower arrangements but the vast majority are secular, derived from the Advent wreath but that have very little to do with its original symbolism.

The Advent wreaths (Advent means in Latin “the one who comes”) is a spiritual tradition that also arose in Germany and marks the beginning of the Christmas season. The Advent crown has 4 candles, three purple and one red. The purple ones are lit one by one each week before Christmas. They represent hope, peace and love. The last one, the red one, is lit on Christmas Eve and finally, a white candle is added in the center that is lit on Christmas day.

From the point of view of Vastu, a candle represents the fire element and keeping our body close to the energy of a candle provides numerous benefits to our energy body. On the other hand, the Vastu recommends lighting them at home always in odd numbers because in an even number, the benefits would cancel each other out.

Discover the meaning of Christmas lights:

The Christmas lights represent the light of God in ourselves. It’s a kind of call to carry that light throughout the world too.

Saint John, Jesus said to the Jews: “I am the light of the world; whoever follows me will not walk in darkness, but will have the light of life” so the Christmas lights come to remember the light of the Christ consciousness that’s within us. And I would say not only if you are Christian.

In India for example, when Diwali is celebrated, all the houses and streets are filled with light to remember the spiritual victory of light over darkness, good over bad, and wisdom over ignorance.

The meaning of Christmas decoration with Vastu:

The purpose of Vastu is nothing more than to create harmonic spaces that provide health and spiritual well-being, helping you to connect with your own Divine nature.

Paramhansa Yogananda said that at this time of year Christ consciousness is especially close to the earth and more accessible to those who seek it. He also gave a mystical explanation of Christ’s statement: “Where two or three are gathered in my name, there I am in their midst.” And that’s actually the purpose of getting together for Christmas!

The deeper meaning is that when two or more of our thoughts come together to focus on Christ, we will experience his presence within us. Thus, the Christmas decoration is nothing more than a set of accessories that seek to inspire and connect your thoughts with that Christ consciousness, raising your energy and connection with the Divine.

I hope this post has been clarifying to you and… I wish you a very Merry Christmas!

With light, peace and love,
Julia